Nowadays, UAVs and UAS, more colloquially known as drones, are expanding in the military, private and public sectors. Precisely, Israel is highlighting as one of the most relevant countries with a higher trade rising in the industry. For this reason Embention attended as an exhibitor last 9th and 10th of November 2015 to the international exhibition and conference of autonomous and unmanned systems in Israel, UVID 2015, with the theme: “The Unmanned Systems reach maturity”, having a great success.

Embention is focused on the development of critical systems and products in the Unmanned Aircraft Systems (UAS) industry, it strengthened its trade relations in the UVID 2015 show, building strong links with several potential customers of various sectors. First contacts with different private companies were initiated for joint development of diverse platforms, by harnessing the potential of Veronte Autopilot. In addition to continuing in contact with different divisions of entities present to track developments associated with Veronte.

The show also permitted to consolidate the so necessary links with other UAV components companies, producing: servos, actuators, transponders, sensors, radio links, etc… these relationships improve the possibilities for the development of a wide variety of applications for Veronte Autopilot. A high performance autopilot for the control of RPAS, drones and UAV. Veronte is completely flexible to operator requirements with the possibility of performing missions based on curves and to integrate RTK, artificial vision, custom modules, etc… 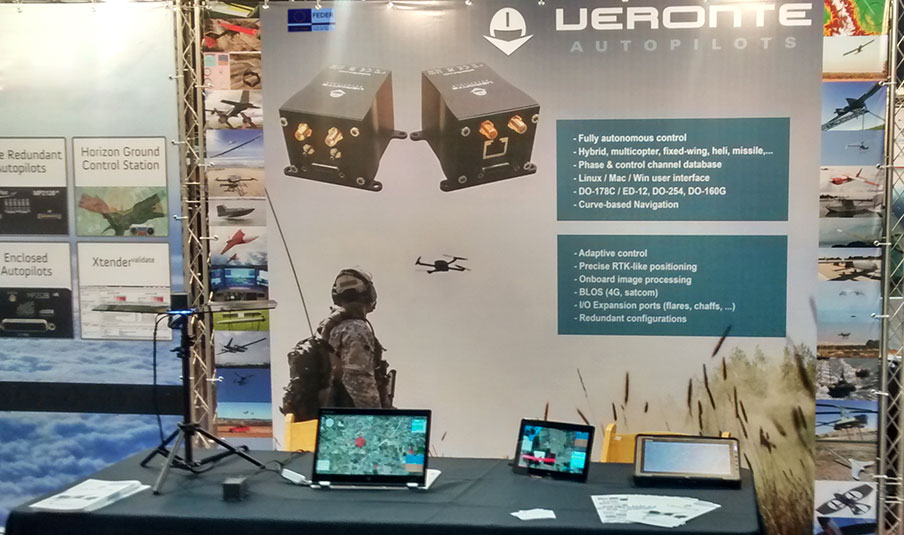 During the UVID 2015 diverse products were exhibited, a part of the Veronte Autopilot, developed entirely by Embention, in which highlights its small size and its great features, some of these described above.

The control station Veronte TGS was also presented, it integrates all the elements of the ground station in a rugged tablet, maximizing the mobility of the system. Standing out the joystick functionality, thanks to the integrated accelerometers permits the control of the UAV or the payload, simply by tilting the tablet in the desired direction.

Furthermore the control station software Veronte PIPE was exhibited, a multiplatform software (Windows, Linux and Mac OS), and compatible with touch devices such as tablets and phones. With this intuitive and easy to use software: missions can be edited in real time, it is possible to control multiple UAVs at same time, etc…