Unlike radio-controlled aircrafts, a drone don’t need a constant data input by the operator because it is able to fly by itself, the operator simply requires to supervise the flight with the help of a joystick. In cases where a highly autonomous flight management is needed, a user interface for monitoring the flight operation is required.

A complete and efficient user interface offers a step forward in the efficiency by reducing the workload of the drone operator, showing or hiding system variables; with the possibility of changing it at any time during the flight. Adapting the user interface to operation needs, maintaining a clear workspace, without distractions. In addition, the flight safety is increased by always keeping the operator alert with system alarms that are triggered by events such as the eventuality of a collision, low fuel, or loss of communications datalink,… 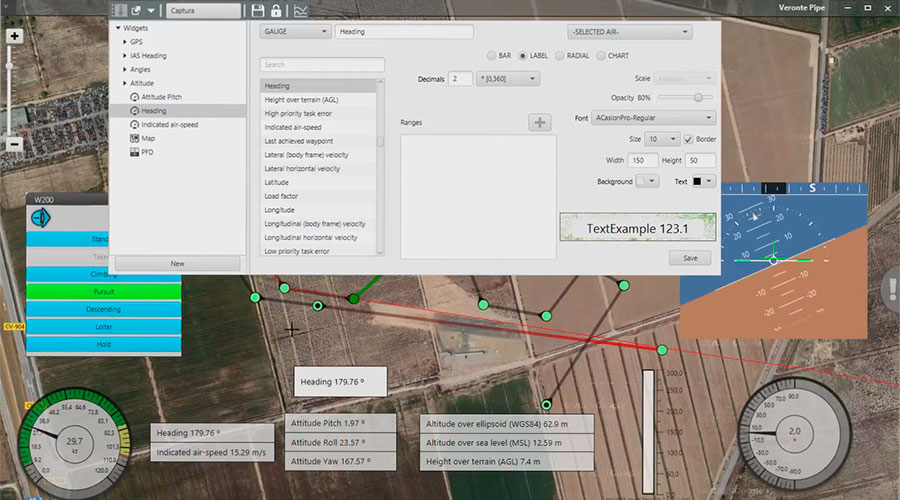 Depending on the mission to be performed by the drone, it may be necessary to use different maps to obtain an accurate monitoring of the objectives to be achieved. This functionality is accomplished with a customizable user interface, which allows the use of: contour maps, satellite maps, multispectral or infrared maps,… It also allows having multiple operators simultaneously, monitoring different aspects of the flight as would be: flight variables, drone sensors, mission data, etc…

This kind of user interface can unify the control of peripherals incorporated in the drone, such as cameras, transponders,… without having to use additional software to control each of these devices. In these workspaces even it is possible to avoid the use of a physical joystick, as they permit to configure virtual joysticks to control both the drone and the payload. Furthermore this kind of software is usually portable to almost any device such as tablets, mobile phones, or any custom control station even with capacity to expand the workspace to multiple screens.

Veronte Pipe, one of the most powerful and sophisticated user interfaces in the market is included with Veronte Autopilot, achieving all functionalities described above.

This user interface permits to have a configurable background map, with the possibility to insert custom images or use maps from internet suppliers such as: Bing, Google, Open Street, Map Quest, Ovi, etc… Widgets and displays are fully customizable and can be dragged and drop throughout the screen, change its content and even its size. It also facilitates to have different workspaces configured for each operator or each operation, adapting to the needs at any moment.

With the Veronte Pipe user interface variables can be selected to display telemetry with different display styles, add external sensor measurements and configure custom visual or audible alarms. It also makes possible to monitor terrain level with cross sections to the surface in order to avoid collisions.

Furthermore, this software lets us work with extended desktops, in which the workspace is controlled with multiple simultaneous displays; being compatible with touch screens and tablets or mobile phones. Similarly Veronte Pipe incorporates a virtual joystick to control payloads or drone flight and it is capable of supporting the integration of any external camera in its interface.

Ultimately, the user interface in Veronte Pipe is the best monitoring option if we wish to control our completely autonomous drone with a reliable, versatile, customizable and secure workbench.