LUNA NG is a platform developed by EMT for inspection and surveillance in harshest environments. This high-performance UAV stands for high quality, reliable, versatile and high-performance aerial equipment. Its application is ideal for both military and civil purposes.Embention works together with the German company to cover two dimensions of the aerial platform. The first one is to develop a VTOL version of the platform with a fully autonomous flight. The second one is to use Veronte Autopilot and Embention’s extensive experience in certification for system certification with the German military aviation authority.

This 5.3 m wide aircraft has been in service since 2000. The 4x Veronte Autopilot has allowed the certification of the system, being the first company to pass VVZ1 TC and VVZ2 TC with LufABw in Germany.

This UAV belongs to one of the main lines of EMT. It becomes a fundamental tool together with Veronte Autopilot for its ease of operation in any weather condition. Also, for its ability to function at maximum day and night performance. Actions such as command, control, communication, intelligence, surveillance or identification are executed with total versatility and ease with Luna NG whatever the conditions.

LUNA NG has a wide malleability and the possibility of incorporating sophisticated and advanced payment charges. Missions in various countries precede the success of the platform since its launch. Their capacities have been tested under critical weather conditions. And in areas with extreme conditions (such as the Arctic, desert or jungle areas). Overcoming these conditions not only with success but with efficiency makes LUNA NG platform become a milestone in terms of operation, profitability and reliability. Both in military and civil projects.

The innovation and engineering behind LUNA NG is base on automated and simplification systems. For that reason, the assembly and implementation process of any action becomes a minimalist process that does not require personnel with advanced aeronautical knowledge.

LUNA NG performance is higher and more profitable than other unmanned systems. This is thanks to its finish and modular structure. Furthermore, it can be easily transported in any vehicle. That is, without having to carry a greater deployment as it happens with other aircraft that require a medium or larger transport.

The structure and base of the UAV are made of plastic material reinforced with fiberglass and carbon. For this reason, its structural load is very light. The finish allows it to have a long useful life as well as a low acoustic and radar level.

In addition, LUNA NG has an optional module that makes vertical take-off possible. Embention had the pleasure of moderating the flight for the first time showing the ability to take off in VTOL mode. As well as continue functioning as a fixed-wing then removing adaptation pods.

One of the unique features of the LUNA NG range is its ability to plan without using engine power. Therefore, without acoustic signals. Even having entered into a state, the platform can start the engine again easily and without losing. The advantage of this is that LUNA NG can carry out missions where the movement and route can be carried in total silence. Without being evident the pass of the UAV through a designated area.

The datalink provided on the platform allows data to be transmitted in real-time from the system incorporated in the platform to the ground control station. This allows the execution of fully automated missions without the need for a signal radio.

Another distinguishing UAV LUNA feature is the capacity to start a safe landing in case of a collision or unexpected event. It incorporates a high-performance release and landing system with a parachute. This functionality, developed jointly with Embention, together with compliance with the DO-178C standard for software development and the DO-254 standard for hardware development make it the safest platform in its category. 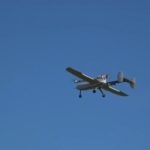 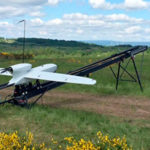