The FALCon project rises from the collaboration of the German Aerospace Center DLR (Deutsche Zentrum für Luft- und Raumfahrt) together with Embention, and other entities such as: the Institute of Mechanical Engineering of the Bulgarian Academy of Sciences, Drone Rescue Systems of Austria, soft2tec from Germany, the Von Karman Institute of Fluid Dynamics of Belgium and Astos Solutions from Romania. All work together on a joint project that will see the light in 2035. And that proposes revolutionizing the vision of the environmental and economic cost of the aerospace industry.

The FALCon project aims to make it possible to reuse the first-stage boosters in space operations. Through an advanced flight capture system and towing it to the landing station. For this, the system uses the latest drone technology to emulate the expected behavior in the real rocket launch operations.

This concept of reusable launcher would use a winged first stage with gliding capabilities to descend performing a controlled re-entry, returning the rockets back to the ground safely.

The system has 3 main elements:

In the early stages of the project, Embention is responsible for making a scale model of this recoverable winged fuel module. With the development of this model, Embention faces several challenges:

All this is achieved thanks to Embention’s extensive experience in the development of unmanned systems and the versatility of Veronte Autopilot, one of the most advanced flight control systems for UAVs in the market. All this development is done following the strictest safety standards of the aerospace industry in order to guarantee the reliability of the system and ensure the safety of the operation.

On March 2019, DLR along with all participating companies and institutions baptized its project as a “Rocket Receiver“. The mission of this consortium is to provide simulations and controlled flight trials with relevant scale models to ensure the long-term execution of the FALCon project in full scale.

The name of the project is inspired by the name of its eponymous bird “Falcon”, which dives to capture smaller species.

The budget for the first phase of the project is 2.6 million euros (3 million dollars). The use of remotely piloted vehicles (UAVs), commonly known as drones, has allowed to significantly reduce development costs while controlling risks during the flight tests of this technology demonstrator.

The realization of this project in a not distant future would mean a significant notorious waste that is abandoned and lost in the space ecosystem. 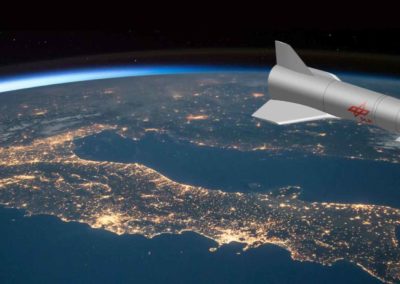 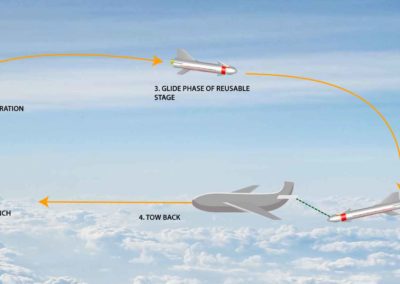